This project essentially unites two functions in one unit: a housing for batteries, a Tarot ZYX-T3D IV three axis gimbal and its controller, and a motor, gearbox and electronics that rotates the unit continuously through 360º. The gimbal is compatible with Runcam5 cameras and eliminates residual motion beneath the aeronaut suspension. The pan rate can be adjusted: the direction clockwise or anticlockwise can be switched too.

The Tarot gimbal is specifically designed for drone photography and includes anti-vibration rubbers not needed in this application and which were removed. A 3D printed housing carries the gimbal and incorporates recesses for a pair of PP3 batteries. A flying lead from the battery pack feeds power to the upper panning unit via a small 2 pin plug where it is regulated to 12V.

Several design iterations were made of the panning unit before satisfactory operation was achieved. These experiments evaluated several stepper motors salvaged from printers, before a suitable Minibea unit was selected. This motor is driven by a BigEasy Stepper board via a pulse train produced by a 555 oscillator, examples of which litter the Web. A pair of ball bearings support the output shaft on which is mounted a coupling that fits the Aeronaut suspension’s lower flange adapter. 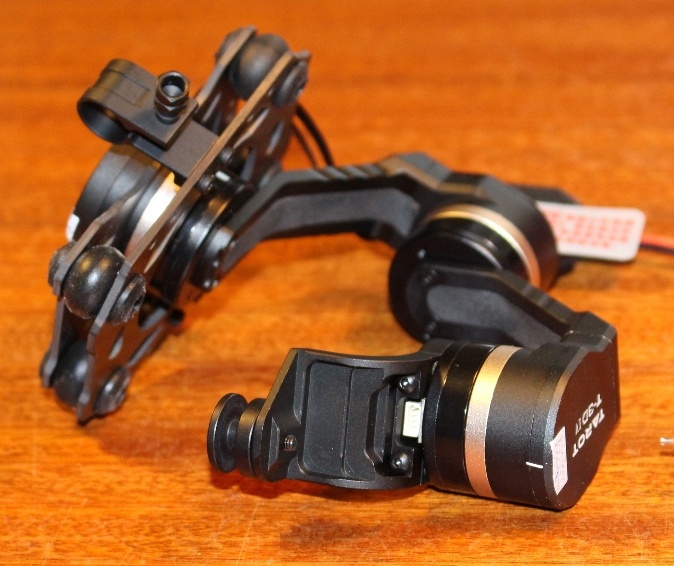 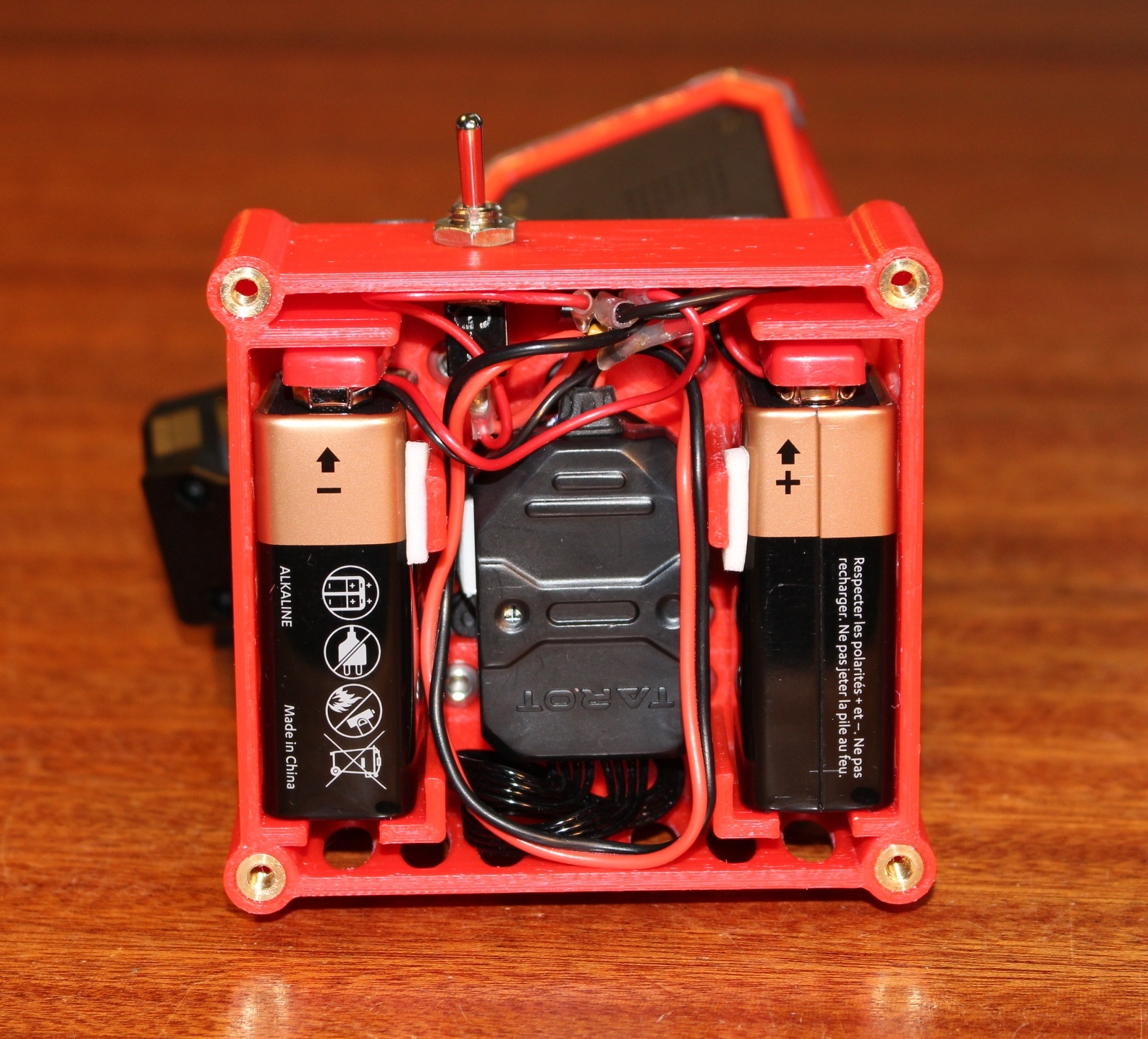 Assembly of the gimbal controller, batteries and wiring inside the 3D printed shell

A major issue was how to minimise backlash in the mechanism. Initial experiments were inspired by early models of the Hewlett-Packard tractor printer which moves the paper (without backlash) by pinching it between rubber- and grit-coated wheels. Thus the MKI version tested a sandpaper coated wheel bearing against a rubber sheathed wheel on the motor shaft, as seen in the picture on this page. This worked well but for only a few minutes, after which the rubber had worn and lost contact with the output wheel.

The eventual solution was to design and print a pair of involute gears for the drive mechanism. By adjusting the motor position backlash can be virtually eliminated. The RESOURCES page points to a good gear design website. FastCAD was used to finalise the profiles. 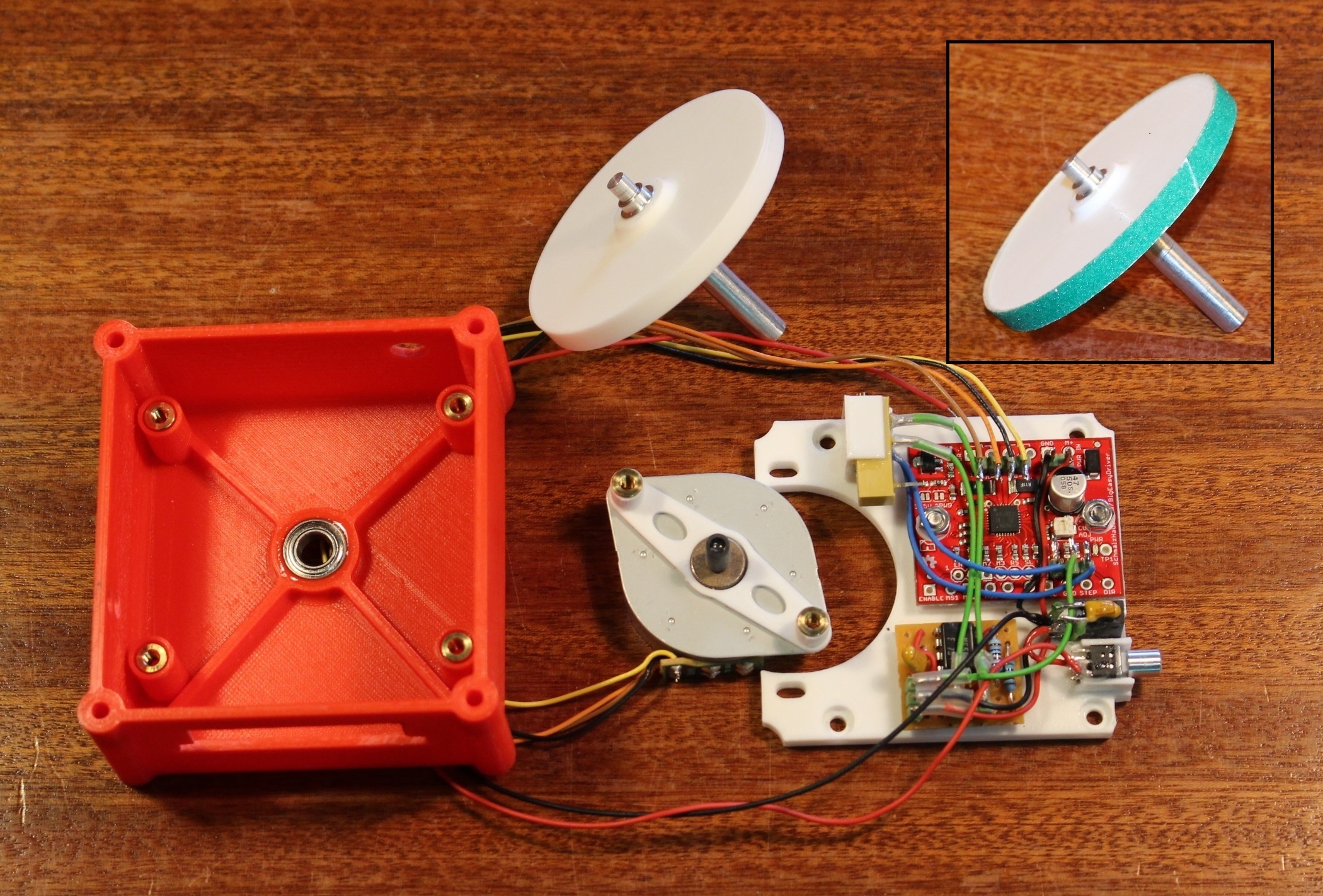 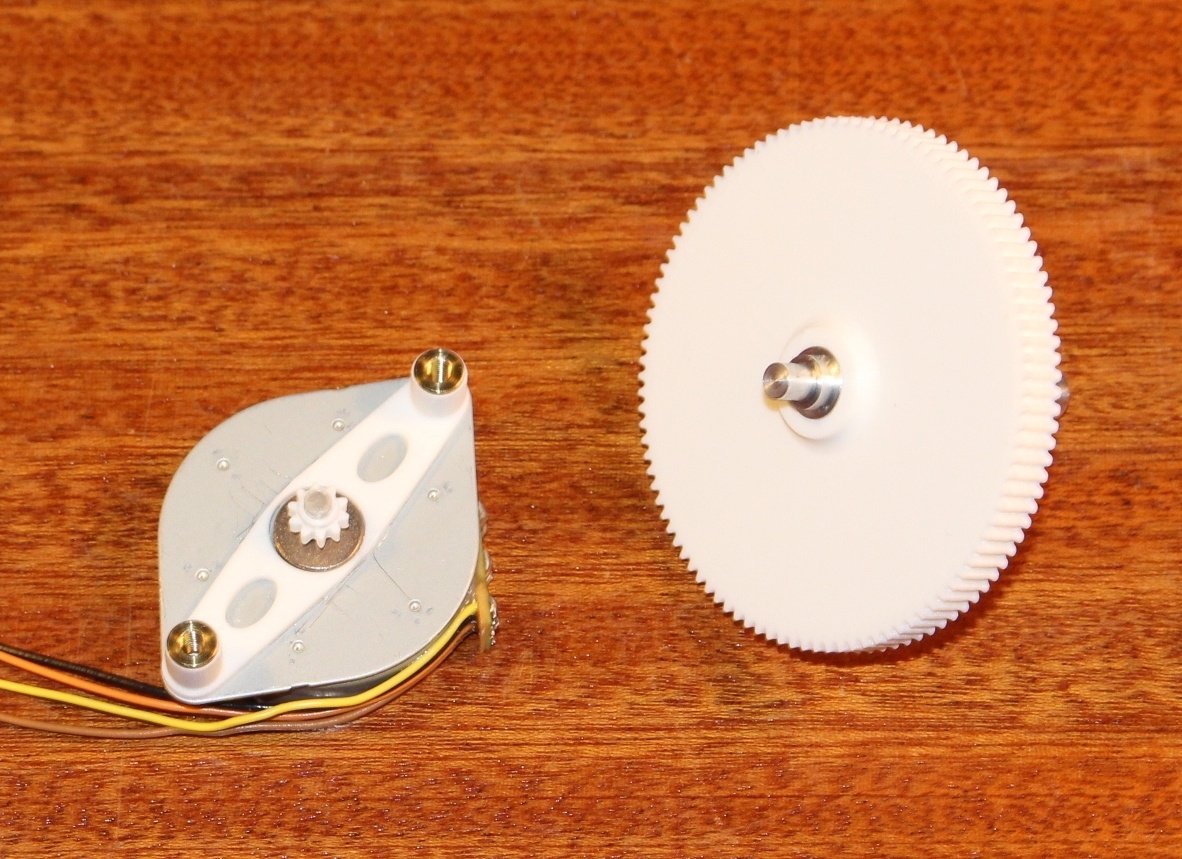 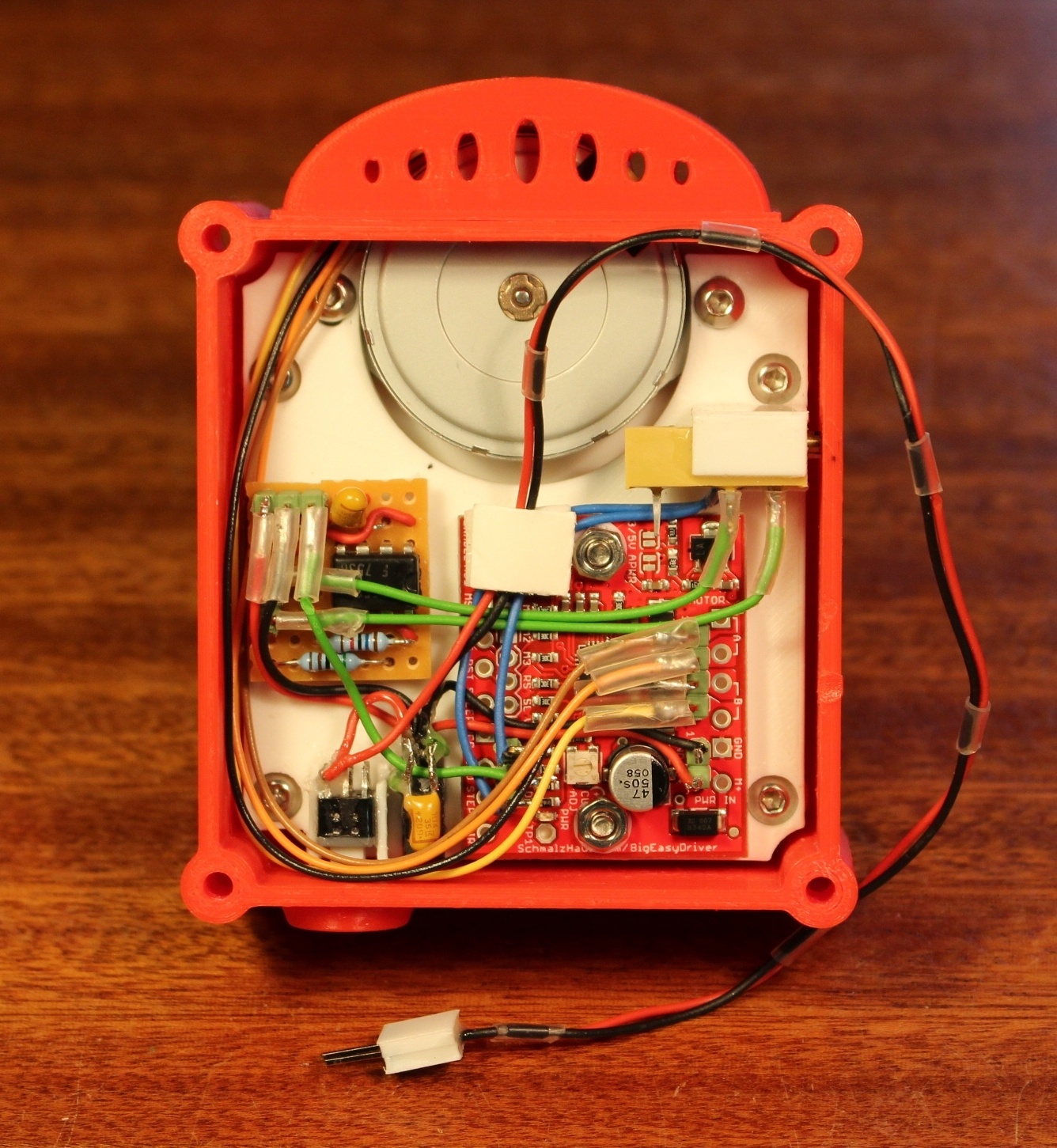 Assembly of the pan unit with pulse generator, stepper motor driver, regulator and switch. the motor is seen at top 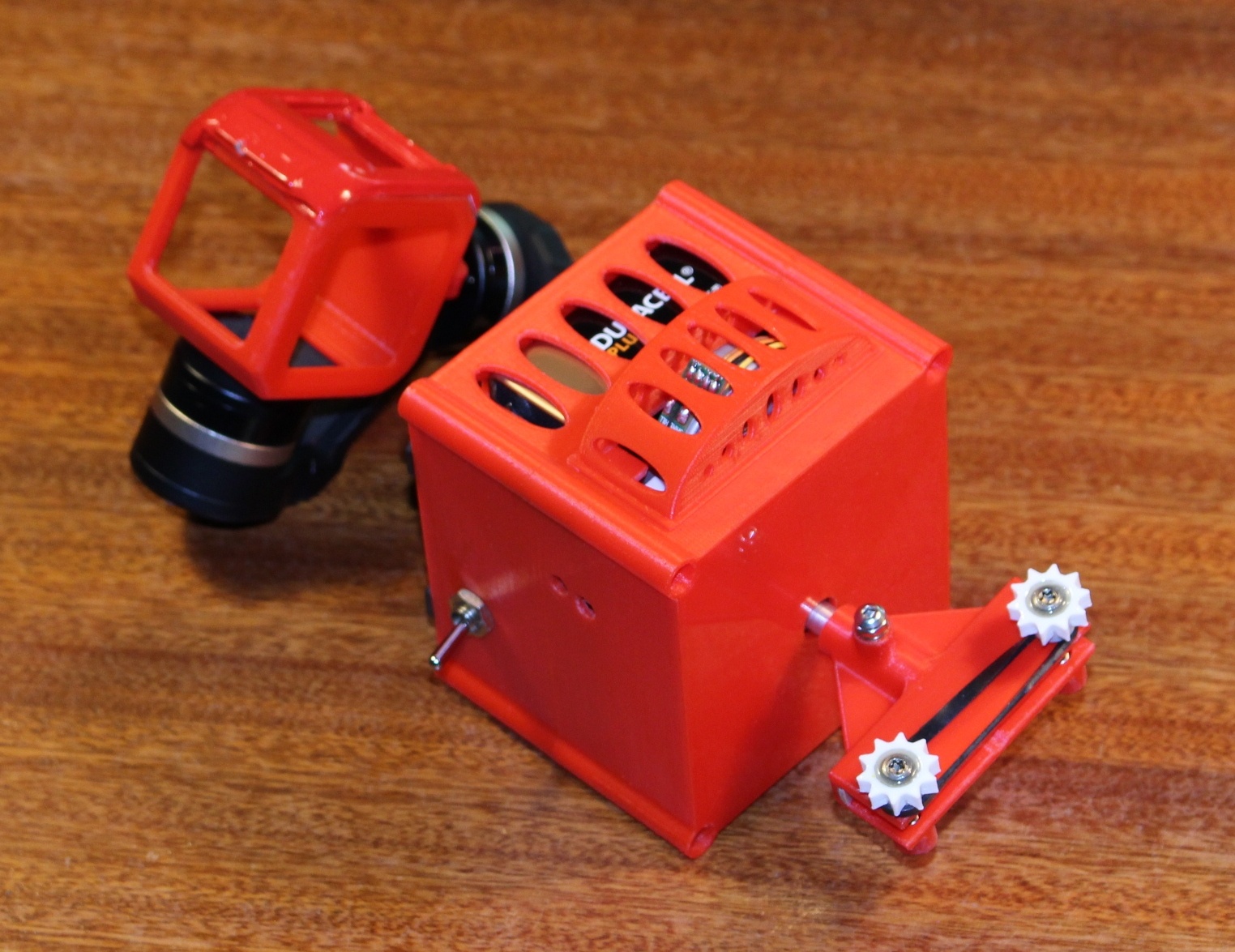 Final assembled PanGimbal with the camera holder fitted to the Tarot gimbal. The suspension coupling is also attached 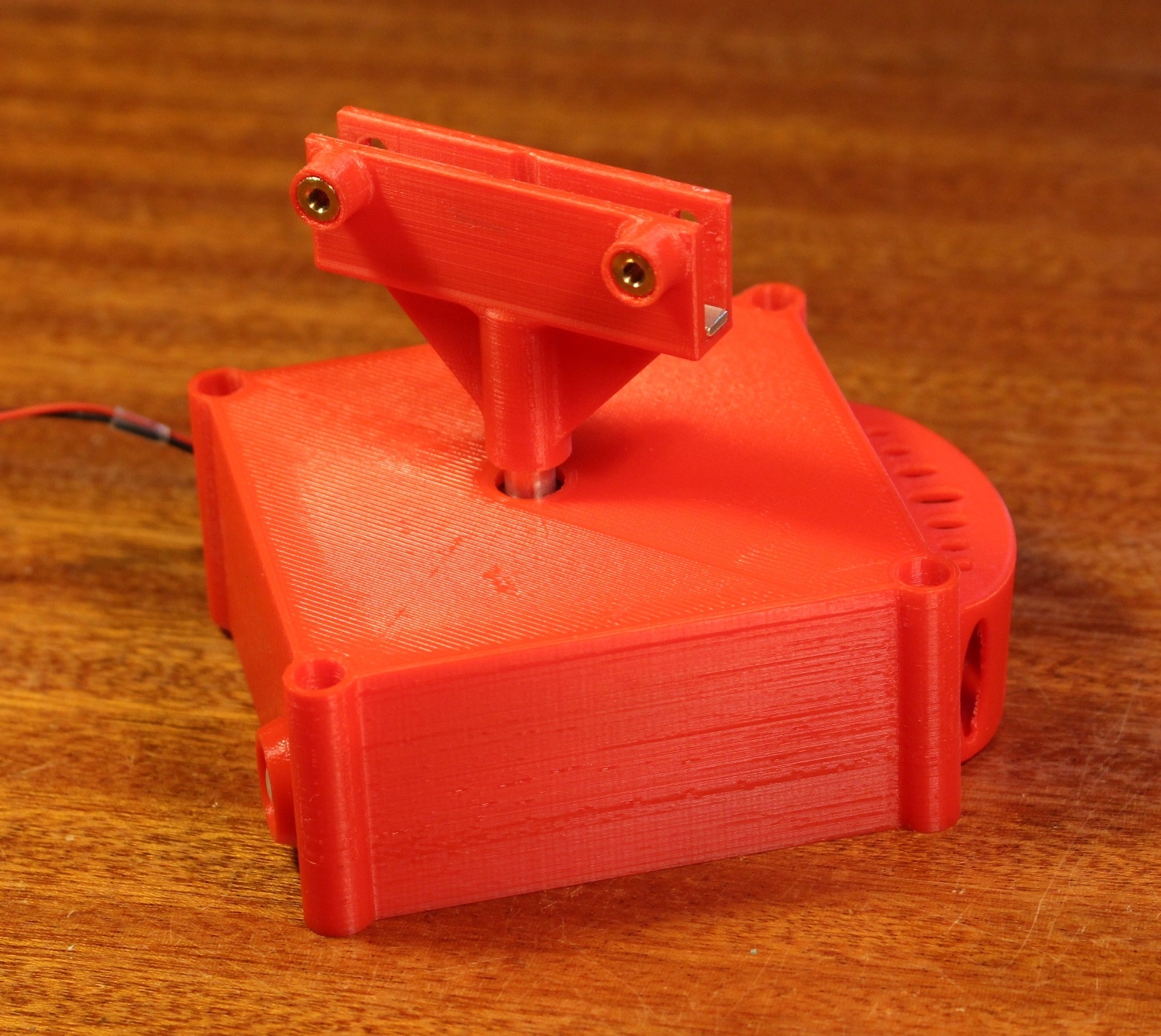 Top side view of the pan unit, showing the ouput shaft and coupling to the suspension

Although the gimbal does a superb job of minimising roll and pitch motion, there was initially some yawing in videos due to the kite responding to changes in wind direction. The solution was to program the gimbal with a very low rate of yaw response (20º/s) which effectively makes the camera yaw lazy and damped as the kite weaves. Tarot’s gimbal settings are shown here.

My design of this panning unit was specific to the salvaged motor and is therefore is presented here only as a guide to inspire others to build something similar. One option might be to drive a 1.8º motor via a microstepping circuit with the motor output shaft directly hanging from the suspension. However these types of motors with sufficient torque tend to be heavier and might be better suited to large cameras and kites with stronger lift. 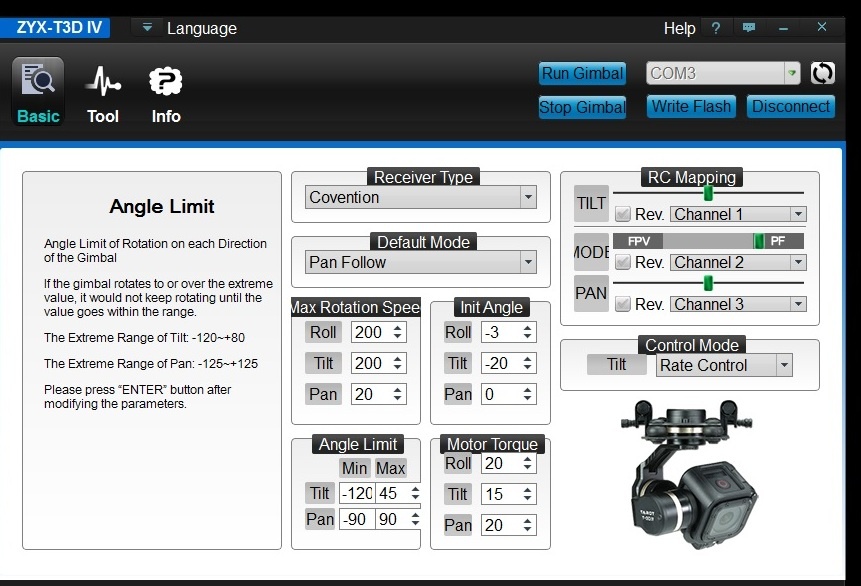